Mongabay Series: Just Transitions
Rabi Bagdi, a man in his mid-30s who has a family of five to run, moves out of his home at Kabilpur village in West Bengal for work at a ‘China clay’ grinding unit in Khoria, about three kilometres away, wearing clean clothes. He returns with a layer of white powder covering his face, hair, body, and clothes.
Asked about his work atmosphere, employment benefits, or health impacts, he looked puzzled and hesitant, even as a thin cloud of white powder is coming out of the pulverizer machine at one of the grinding units – an apparently ominous background to Bagdi’s thin frame on a muddy and slippery road outside the campus.
People who know Bagdi said he is a casual worker who gets paid Rs. 180 per day for an eight-hour shift even as the minimum wage for unskilled labourers in the manufacturing industry has been fixed at Rs. 296 per day by the state government. However, Bagdi refused to comment on anything. In fact, the unit where he works has no workers’ union either. They are mostly casual employees and hence enjoy no protection and benefits like provident fund and gratuity.
The grinding unit is part of Patel Nagar Minerals Private Limited, one of India’s oldest surviving China clay mining and processing units, which was incorporated in 1955. It is the only unit from the state that made it to the list of top 10 kaolin producers in the country in 2012-13.
China clay or kaolin, also called white clay, in crude and processed forms, is used in various industries like cement, rubber, paper, ceramic, glass, paint and plastic, each industry requiring different grades of it. West Bengal has roughly one-sixth of India’s kaolin reserve but accounted for only 2.92 percent of India’s total kaolin production during 2010-11, 2011-12, and 2012-13. This is in contrast to the scene in the 1990s when the state accounted for 0.98 million tonnes, or 14.72 percent, of India’s total 6.6 million tonne kaolin production in the nine years between 1990-91 and 1998-99. Evidently, Gujarat, Karnataka, Rajasthan and Kerala moved ahead as Bengal lagged behind.
The industry in West Bengal is concentrated in the Birbhum district, with Mohammad Bazar community development block at the centre. The village Khoria (or Kharia), which sits at the heart of it, got its name from Khori, which is what the local people call China clay.
Seventeen pulverizer machines operate in Mohammad Bazar, most of them in villages of Khoria and Komarpur, an area also dotted with large pits dug for open-cast China clay mining. Patel Nagar Minerals and Industries Pvt. Ltd. alone holds at least four mining leases, covering an area of 228 acres, while its associated units, N.P. Minerals and Patel Nagar Refractories Pvt. Ltd., operate more mining and processing units, including a calcination unit that started operations in 2017. This group is owned by the Ghosh family, which also has two legislators – Nitai Pada Ghosh from the Congress party in 1972-77 and his son, Swapan Kanti Ghosh, from the Trinamool Congress party during the 2011-16 period.

The workers are mostly in the age group of 18-45 and are from these two villages along with the neighbouring ones like Maldiha, Ganeshpur, Mohammad Bazar, Rajyadharpur, Kabilpur, and Angargaria. The majority of the workers are from the Scheduled Caste (SC) and Scheduled Tribe (ST) communities. During monsoon, the mining and washery operations are mostly halted but the work at grinding units goes on nonstop, in three shifts of eight hours each, with 12-15 persons working in each shift at each unit.
According to N.P. Mineral’s proposal for mining on a 17.84-acre land plot (at Khoria village), “To attain the guideline standards all the dust-generating areas will have dust suppression systems to contain the fugitive dust within the limits of the plant.” It also said, “zero discharge will be attempted to minimise water pollution so that there is no impact on local water resources.”
A government official, who did not want to be named, said that all mining and processing units need to undertake similar measures. But Mongabay-India, during a visit, witnessed dust-covered roads and fields. It was even inside the houses beyond the industrial area. Villagers also complained of wastewater spillage contaminating the local water bodies.
“We need to clear layers of clay dust from inside our home every day. I also suffer from some breathing difficulties,” said sexagenarian Dulal Chandra Mandal, a resident of Kharia.
Asked if he ever complained to any authority, Mandal said, “Whom to complain to? Would I get any support from anyone? I will only antagonise those who earn from these units.”
According to  Biswajit Mukherjee, a former chief law officer of the state environment department and the state pollution control board, ‘a primitive exploitative system’ runs in the China clay mining sector. “No one cares about environmental impact and workers’ rights. Hardly a law related to environmental protection and workers’ rights apply there,” he told Mongabay-India. 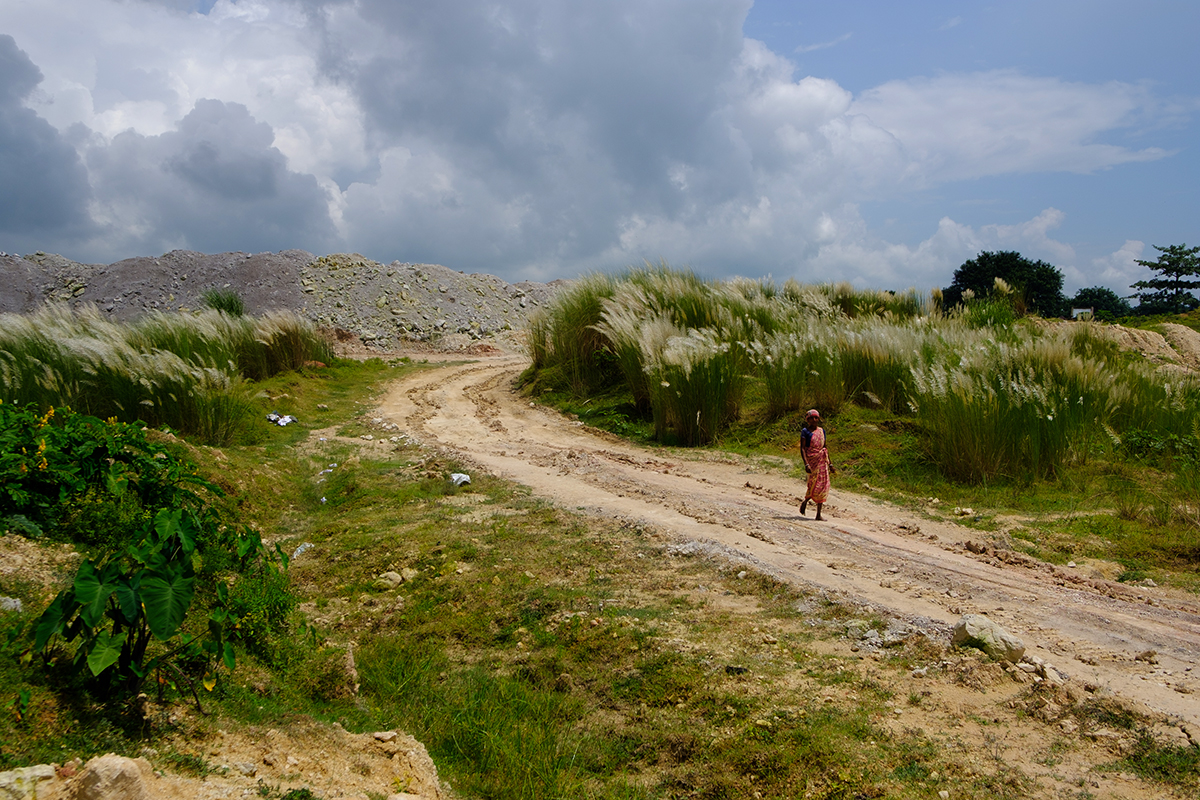 A woman walks close to a mound of mining debris and China clay on a route frequented by heavy vehicles carrying the mineral. Photo by Subhrajit Sen.
Read more: Odisha’s decision to auction virgin mines raises environmental concerns
The mining township of Patel Nagar was set up at the end of the 1950s – carved out of three villages – Rajyadharpur, Khoria and Komarpur – as part of a community development plan. The district census handbook of 1961 also says that the very presence of several tanks, old buildings and mosques pointed to the area’s past prosperity. These villages had a combined population of over 7,000, according to the census of 2011.
The industries also led to the opening of other income opportunities – women learned to make clay powder cakes that have demand for painting, some youths became motor mechanics, some became suppliers of clay powder and cakes.
But according to Sanchayan Ghosh, an associate professor of painting at Visva Bharati University in Birbhum, who paid many visits to the area in connection with his research on the landscape, the promised urbanisation never happened.
A movie theatre, Rajani Cinema, started functioning after the township came into being but it closed down decades ago, while desolate quarters stand as a reminder that they were once inhabited.
“There are technologies available to absorb or store the emitted dust, preventing it from spreading around, but no such infrastructure could be seen there. The local people, however, have mixed feelings because they are also dependent on the industries for income,” Ghosh explained to Mongabay-India.
For instance, Komarpur resident Shanto Das is an indirect beneficiary of the industries – he buys China clay powder from the grinder plant at Rs. 2,000- Rs. 2,200 per tonne and gives it to local women for making clay powder cakes, which he sells in towns and in Kolkata. This helps him run a family of four.
“China clay mining gave us income opportunities but badly harmed the environment and the roads. Dust enters all households and even contaminates food,” he told Mongabay-India.
The local people complain of five common problems – breathing difficulties, depleting groundwater level on farmland adjacent to the pits, surface water contaminated with dust, farmlands losing fertility due to dust cover, and roads made terrible by heavy vehicles.
Seventy-one-year-old Hara Kumar Gupta’s elder son, Partha, is a casual worker at the calcination plant and his younger son is slated to join in November. He said that the local ponds no longer had as many fishes as they used to and farmlands nearby had lost fertility as well, due to depleting groundwater and dust covers. “But we had to accept these fallouts for the sake of an income opportunity close to home. Villages around these mines have more pucca houses than those dependent on agriculture,” said Hara Kumar Gupta.
Read more: Yes, No or Maybe: Fate of Hasdeo Arand forest back in limbo
A quick analysis of the mining proposals for China clay mining in the area reveals that direct employment from the projects is not very high. For instance, in 2019, the Patel Nagar Minerals and Industries, for lease renewal of a 130-acre plot, cited the need for 74 full-time employees, including 60 miners.
Arun Mitra, a leader of the Centre for Indian Trade Unions (CITU), said that they used to have a registered union operating at the Kharia-Komarpur area till 2008 when the introduction of semi-mechanised mining drastically cut down the manpower requirement.
Moreover, some of the locals alleged that, according to the mining lease conditions, a 7.5-metres solid barrier is required to be kept along the lease boundary for plantation, or as a safety barrier that would not be mined, a clause that is often violated. When this barrier is not maintained, the adjacent lands belonging to other owners lose groundwater resources and either become uncultivable or caves in. Owners are left with no other option but to sell those for mining.
In 2014, in the paper ‘Environmental degradation and their effective measures in Patel Nagar, Birbhum’ Proloy Mandal, currently an assistant professor of geography at Raiganj University in West Bengal, wrote that “the surrounding fertile agricultural land is challenged” and the area “faced hydrological problems, defaced landform, dust and air pollution, water pollution, soil erosion, and influence on the natural drainage system.”
Doctors at the government-run Md. Bazar Bloc Primary Health Centre at Patel Nagar refused to comment when asked if they receive a relatively higher number of patients with breathing difficulties.
An email sent to Patel Nagar Minerals Pvt. Ltd. for a response remains unanswered.

Banner image: A man cycles past a mound of China clay and debris from mining dumped at the side of the road in Kharia, West Bengal. Photo by Subhrajit Sen.
Mongabay-India is a conservation and environment news and features service that aims to bring high quality, original reports from nature’s frontline in India.
© 2021 Copyright Mongabay-India