Singapore, Sept. 21, 2021 /PRNewswire/ — Come this Sunday, HyperLive.tv will once again team up with Singapore Artistes Association to livestream a charity concert titled ‘All Stars e-Getai Charity Concert 2’. The virtual concert, which will be held on September 26 at 8 PM GMT +8, will be accessible free of charge to HyperLive.tv users around the world.
The charity concert is the second event of such scale held on HyperLive.tv in successive months. The first was held in conjunction with the launch of HyperLive.tv on August 28, showcasing a multitude of the platform’s interactive features, which include live polling, live interaction and live gifting. The concert raised over $70,000 for Singapore Children’s Society on the night – a successful proof of concept for the revolutionary fundraising campaign. 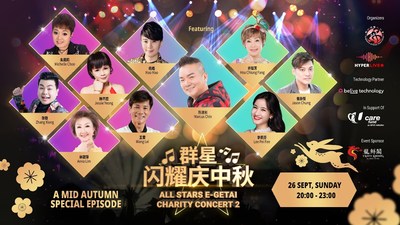 The upcoming show will be held in conjunction with the Mid-Autumn Festival celebration, featuring notable getai artistes such as Marcus Chin, Wang Lei and Lee Pei Fen, who will sing and perform songs selected by the viewers via live polling on the platform. The aim is to raise funds for the NTUC-U Care Fund, the charity arm of Singapore’s Labour Movement that aims to better the welfare of lower-income union members and their families. Mr Desmond Tan, Minister of State for Home Affairs and Sustainability and the Environment, will be the guest of honour at the event.
Charitable causes such as these are a common theme for events featured on HyperLive.tv so far. The Singaporean start-up founded the ‘SGLive Initiative’, which champions community support for local businesses and non-profit organisations that have suffered greatly due to the pandemic. As part of the initiative, another variety show, ‘Celebrity Tour with the Stars Live! – Hawker’s Untold Stories’, was launched to support local hawkers and has raised more than $7,000 in food sponsorships to help various groups in need.
Through these shows, HyperLive hopes to showcase the potential of livestreaming to help local businesses reach a wider audience by utilising shared resources on its new interactive platform while leveraging the popularity of local influencers.
HyperLive.tv co-founder Sean Wong said, “We are deeply moved by the kind support that we have received from the public for our events. It is an expression of solidarity from the community as we Singaporeans stand together in time of need. We hope to help more Singaporeans through the SGLive Initiative and with the community’s support, we can extend our reach to a nationwide level.”
NTUC Assistant Director-General and Director of NTUC Care and Share Department Zainal Sapari said, “We are pleased to collaborate with HyperLive Entertainment and Singapore Artiste Association as part of our NTUC-U Care Fund fundraising efforts this year to help our lower-income union members and their families whose livelihoods and incomes continue to be affected by the ongoing COVID-19 pandemic. This is the first time that we are raising funds through an online getai charity concert to encourage the community to donate to a worthy cause. Every dollar counts, and collectively, we can make a difference.”
The organisers hope to raise $100,000 for the NTUC-U Care Fund. Through various assistance programmes, the charity has supported many lower-income families by defraying their cost of living and their children’s school expenses, as well as caring for the elderly.
Interested donors may contribute by sending their donations via live gifting during the livestream event on HyperLive.tv or donate directly through Giving.sg via the link below:
https://www.giving.sg/ucarefund/getaiconcert
About HyperLive Entertainment
Launched in August 2021, HyperLive.tv is the ultimate entertainment platform to watch live shows and events. HyperLive.tv combines music, entertainment, lifestyle and exclusivity with highly interactive features that makes for an engaging viewing experience – HyperLive has created a unique and exciting way to broadcast and watch content live. Registration to HyperLive.tv is free where viewers can access all the exclusive #SGLive shows and more.
About NTUC-U Care Fund
The NTUC-U Care Fund was established in 2009 to consolidate the Labour Movement’s fundraising efforts to better the welfare of lower-income union members and their families. Through the collective efforts of the NTUC-affiliated unions, association and social enterprises, together with management and tripartite partners, $113 million has been disbursed since 2009 to help workers affected by the economic downturn and fund our assistance programmes. Since its inception, the NTUC-U Care Fund has strived to make a difference in the lives of its lower-income members and their families by helping them to lessen their financial burden.
SOURCE HyperLive Entertainment