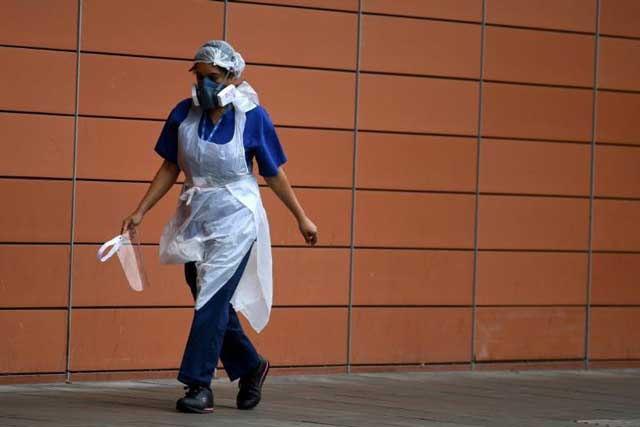 Kitgum, Uganda | THE INDEPENDENT | Medical workers in Kitgum District are unhappy over the delayed payment of their allowances as frontline workers in the fight against COVID-19.
The government disbursed shillings 407 million to Kitgum District in July this year to facilitate emergency responses in the fight against COVID-19.
With the disbursement, the District taskforce had allocated shillings 13.5 million for the case management, shillings 8.4 million for surveillance, and shillings 9 million for Laboratory, to facilitate frontline health workers in combating the contagion.
But nearly three months later, none of the committees in the District taskforce have received payment.
Dr. Geoffrey Okello, the acting Medical Superintendent of Kitgum General Hospital who also doubles as the head of case management on Friday told Uganda Radio Network (URN) that the delayed payment is grossly affecting their work.
Dr. Okello who was speaking at a weekly taskforce meeting notes that most of the frontline health workers are abandoning their work over nonpayment adding that he is now left working alone with a few nurses.
Dr. Okello wonders why the case management team’s requisition is being delayed at a time his team needs facilitation to handle the rising COVID-19 cases.
“I am not going to change anything on that paper, if you don’t want to pay the money let it be. And if that money is not paid, because I am working alone with some few nurses, we know the direction we shall be taking,” said Dr. Okello.
Like the case management committee, other committees in the district taskforce have also raised similar complaints of not having their budget requisitions approved.
Simon Knox Okongo, the District Surveillance Focal point officer also notes that their surveillance activities are being affected by a lack of facilitation despite the money being readily available in the district.
Okongo says a requisition he sent to the district finance department was turned down over allegations that it had members whose job titles were unknown and are suspected to be ghosts.
But the Kitgum District Chief Administrative Officer Martin Jacan Gwokto told the task force members that names of volunteers submitted by the surveillance committee was unclear and thus couldn’t be approved for payment. He says the names were submitted without titles and thus would generate queries during auditing.
According to Gwokto, delayed payment of facilitation arose from challenges the finance department faced last week with internet connection, making it impossible to forward some of the requisitions to the accountant general for final notification.
Gwokto has promised the taskforce committee members that payments will commence by next week with those whose paper work is right according to the financial procedures.
Kitgum Resident District Commissioner William Komakech yesterday told Uganda Radio Network in an interview that they have managed to intervene in the complaints raised by medical workers to avoid jeopardizing their work. Komakech days the medical workers are expected to get their budget allocation by Wednesday next week.
Out of the 407 million shillings COVID-19 fund, shillings 14.3 million has been allocated for the communication committee, shillings 193 million for village Health Team, shillings 64 million for Village Taskforce Team Allowance, shillings 16 million for vehicle maintenance. Other allocations are shillings 1.5 million for servicing cold chain generator, shillings 20 million for District task force, and shillings 63.2 million for the lower local government.
Kitgum District has in the past one week seen a sharp rise in cases of COVID-19 with at least 20 people who tested positive and one death registered at Kitgum General Hospital. The death brings to eight the number of people who have succumbed to COVID-19, while cumulative positive cases have hit 458 since March last year.
****
URN
Tags covid health workers Kitgum Uganda
September 20, 2021
September 19, 2021
September 19, 2021
Your email address will not be published. Required fields are marked *