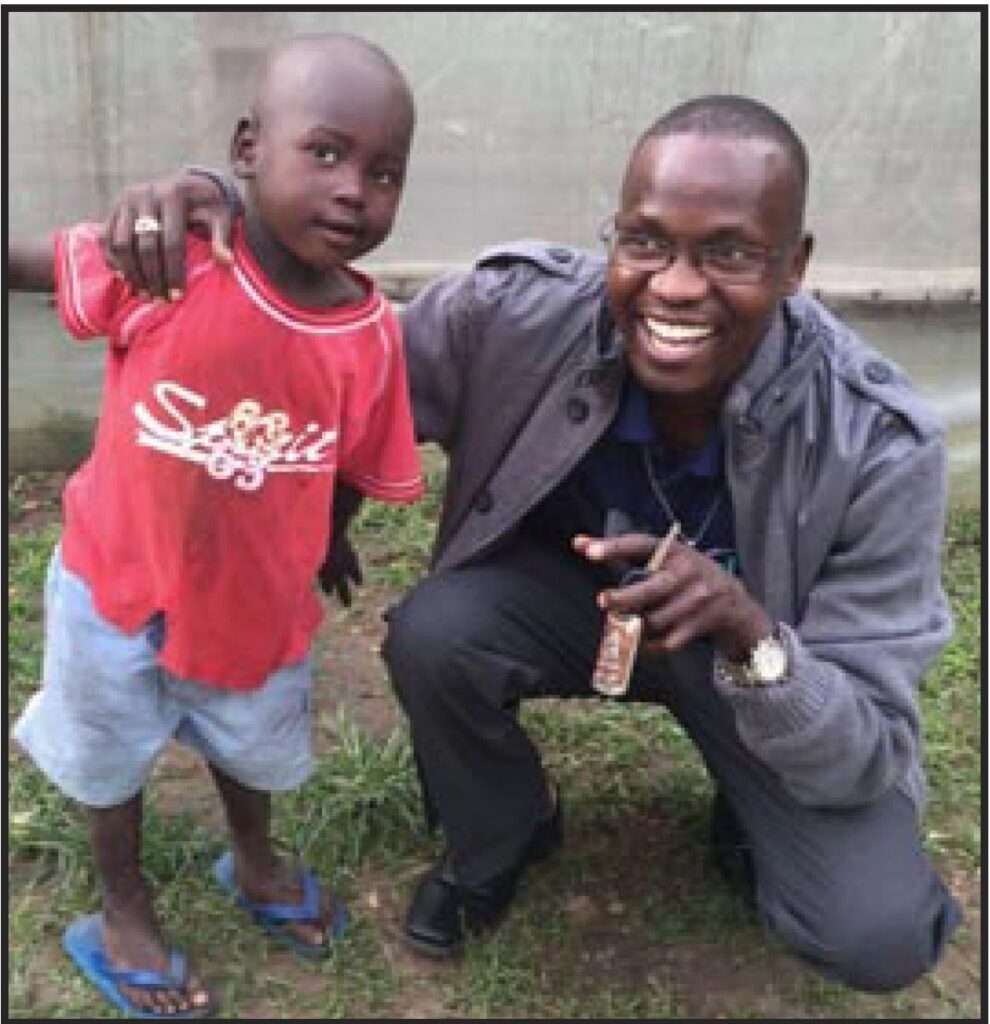 It’s something unimaginable for residents of Tempe and West Chandler, but for Michael Scaramella, it’s a tragedy that’s never far from his mind.
“None of us have been on the street. None of us have been starving. These kids, unfortunately, have,” said Scaramella.
He is referring to children in Uganda, where inhabitants struggle amid grinding poverty, ongoing tribal warfare and religious persecution. For millions, education is out of reach.
Scaramella is the new executive director of E3 Africa, devoted to educating, enriching and empowering young Ugandans. The Rev. Robert Aliunzi, A.J., co-founder of E3 Africa and a native of Uganda, is pastor of St. Andrew the Apostle Catholic Church in West Chandler, where parishioners have stepped up to support the effort to assist Ugandan children.
Scaramella pointed to the many E3 Africa sponsors who, for $70 a month, pay for schooling and, in some cases, room and board for children, many of whom are orphans. In 2016, the organization broke ground on a school, St. Thomas Aquinas in Uganda. A ribbon-cutting for the campus’ multi-purpose room took place in 2016.
Construction is ongoing as the school expands. Some sponsored children live at and attend the St. Thomas Aquinas in Uganda while others live at home or attend classes elsewhere, endeavors funded by donors and benefactors. At this time, however, due to the pandemic, the Uganda government has shut down all schools.
“You see videos of these kids crying because they can’t go to school,” Scaramella said. “For them, it’s not a vacation. It’s not a break. It means more and more suffering.”
Part of that suffering is because E3 Africa provides meals for students. With schools closed, they are missing meals. A big chunk of funds raised by E3 Africa goes toward food, but the organization has come up with an innovative solution: A portion of the land at the school is used to raise crops.
“Not only are we doing it for the students so they can feed themselves, they are learning agriculture and gaining skills,” Scaramella said. “They will be taking the surplus to markets where they will also be sustaining the communities as well as reinvesting that money right back into the school.”
Aliunzi, even in the face of the difficulties posed by COVID-19, remains hopeful.

“Despite the crisis of the pandemic, this organization is the work of God,” Aliunzi said. “He always brings us good-hearted people to keep it going. And for that we are so grateful.”
St. Thomas Aquinas College in Uganda eventually will educate and house more thanb 800 students and employ more than 50 teachers, administrators and staff. The chief architect, James Ambayo, is an E3 Africa graduate.
BethAnn Bader, a former school principal who belongs to St. Andrew the Apostle Parish in West Chandler, became a sponsor in 2018.
“I know how important education is. These kids, they hunger for it,” Bader said. “They are so eager to learn.”
Three years ago, Aliunzi spoke to St. Andrew’s parishioners about E3 Africa and its efforts to save the children of his homeland. Bader, moved, got involved. It’s hard not to be touched when one considers the obstacles Aliunzi overcame in his quest to become a priest. He was orphaned at a young age and raised by his elder siblings.
As in many developing nations, the government provides only the most basic education, and then only until sixth grade. After that, parents must pay school fees. In a country where nearly half the population survives on less than $2 a day, education isn’t possible for many children, particularly if they are orphaned. While Aliunzi still was a young boy, his teachers recognized that he was bright and would hide him from the school principal who visited classrooms to ensure that students’ tuition was paid.
With no way to fund his schooling, it seemed Aliunzi’s dream of becoming a priest was not to be. Then a Spanish priest took pity on him and sponsored his education. When Aliunzi was ordained, he became a school principal himself, with the dubious distinction of sending away students who couldn’t pay. He turned to cultivating vegetables to make up the difference for impoverished students.
By 2004, Aliunzi was serving in Arizona. A parishioner, Rosalie Weller, asked him how she might show her gratitude to God after her daughter survived a tsunami that struck off the coast of Indonesia, killing 230,000 people.
Aliunzi told Weller about his efforts to sponsor the education of needy children in Uganda and the two co-founded E-3 Africa. Weller died Aug. 16, but her legacy and the work of E3 Africa continues.
Scaramella says the organization has sponsored about 100 children who have graduated from the program.
“In total, we’ve helped around 350 kids,” he said.
The first student E3 Africa sponsored was Richard Opi. Born without arms, the village chief told his parents to kill him because he would be useless to the tribe. With sponsorship from E3 Africa, Opi went on to receive his diploma in industrial arts in 2015.
Bader sponsors 17-year-old Lucy, who wants to become a nurse, and Anthony, who is 14, and wants to become a doctor. She receives letters from both, thanking her for helping them achieve their dreams.
“Anthony’s father abandoned him when he was 1 year old. He wants someone to mentor him and show him how to be a godly man.” Bader said. “That really touched my heart. He’s thankful to be able to go to school—his mom can’t (afford to) send him.”
Bader says her goal is to sponsor more children.
“I’ve been blessed with so much,” she said. “Here’s a real tangible opportunity for me as an American woman to help children who have so very little.”
Information: E3africa.org.
Thank you Joyce for the story on E3Africa. We need more folks to sign up to become sponsors or to donate to building projects. Our Fundraiser event on Oct. 2nd is a great opportunity for folks to come and learn about E3. I don’t know if your News organization would allow you to print the invite, but if so. Please let me know. We still have tickets for sale. Thanks! See you then!

Copyright Wrangler News
One email
Once a week
Unsubscribe anytime