The United Nations has officially named BLACKPINK their newest Sustainable Development Goals advocates!
On September 18, YG Entertainment announced that BLACKPINK had become the first Asian artist ever to be selected as a Sustainable Development Goals advocate for the UN.
Upon being appointed advocates by UN Secretary General António Guterres, the members of BLACKPINK remarked, “We are honored to be joining this journey towards a better world.”
The UN’s Sustainable Development Goals (SDGs) are a blueprint of 17 broad goals aiming to achieve a better and more sustainable future for all by 2030. The goals address a wide array of global challenges including poverty, inequality, climate change, environmental degradation, peace, and justice.
As new advocates of the UN SDGs, BLACKPINK will help raise awareness about the 17 goals and the importance of achieving them. 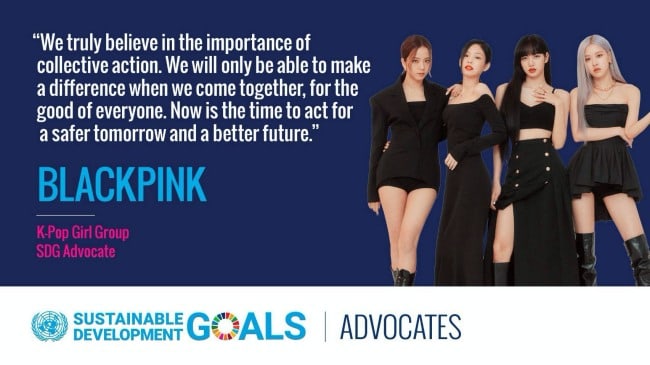 Welcome #BLACKPINK to the UN family!
They have engaged with @COP26 to encourage young people to take #ClimateAction to protect the planet and were appointed today by Secretary General @antonioguterres as our new Sustainable Development Goals #SDG advocates.@ygofficialblink pic.twitter.com/HTXhX7wWSs
— UN News (@UN_News_Centre) September 17, 2021