An election event hosted by the Mississauga Board of Trade Friday was relatively calm, other than a remark made by local candidate Michael Ras.
A resident asked if the gathered candidates, a mix from ridings across the city representing the different parties, would support or oppose construction of the GTA West Highway, which the federal government is currently reviewing after the Doug Ford PCs rammed the controversial project through the provincial legislature.
The NDP, Liberal and Green candidates responded with a range of views, none of them willing to offer support for the highway, but Mississauga—Lakeshore Conservative candidate, Michael Ras replied with a remark that caused concern among many who agree with the City of Mississauga’s official position, that the highway would be an environmental disaster, would have few benefits and should be permanently scrapped.
“It is a provincial responsibility, provincial decision, largely there is the impact assessment that the federal government is doing,” Ras replied.
“I think that’s prudent, I would just ask that that type of work be done expeditiously, cut as much red tape as possible, cut the time needed as much as possible. From what I’ve seen so far, personal opinion, not government opinion, not party opinion, necessarily.”
He then said the highway might be able to meet conditions established by the local conservation authorities, which have to assess the viability of proposed projects to make sure a number of environmental, ecological and watershed requirements are met. If not, these authorities can reject an application. 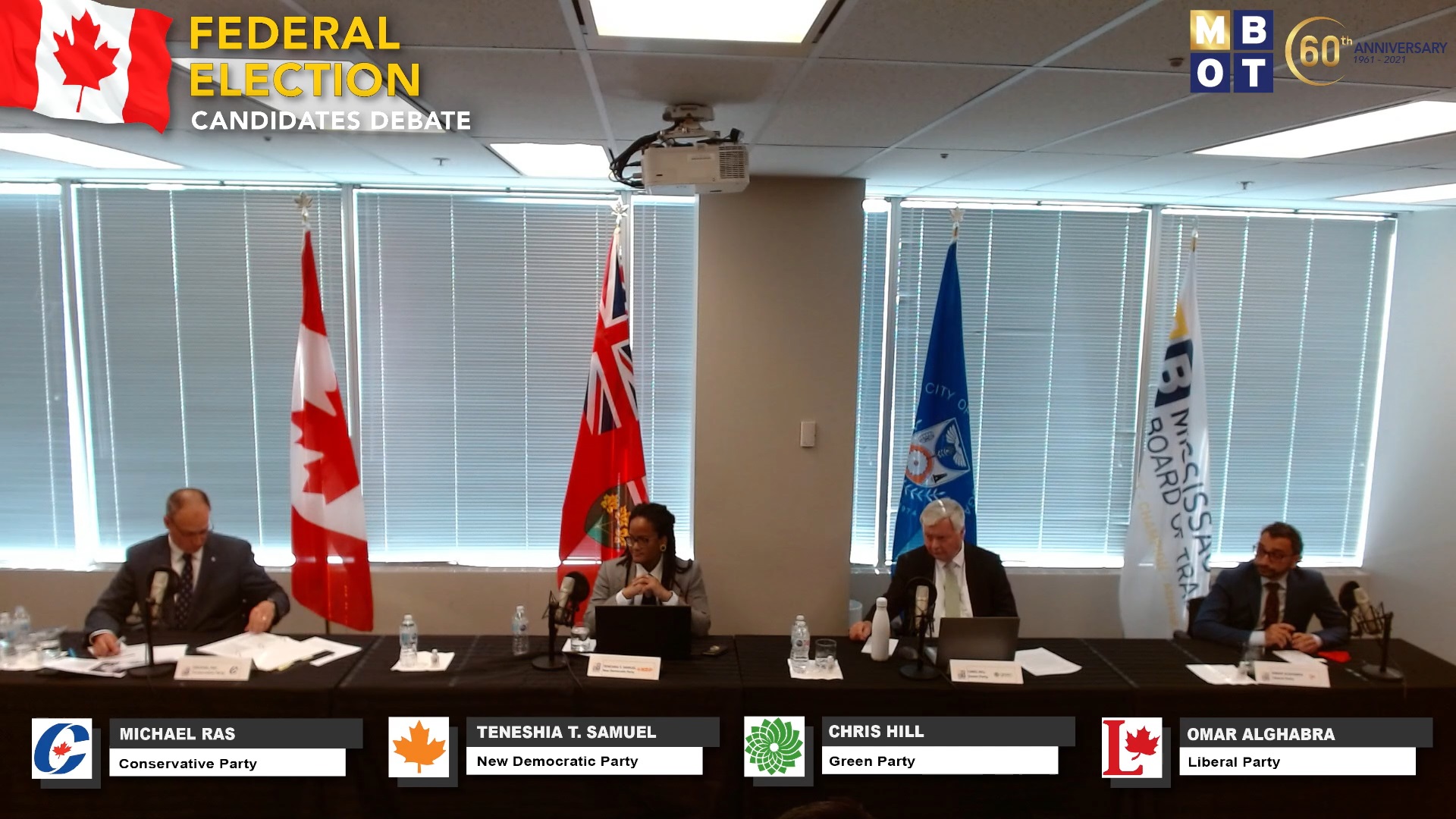 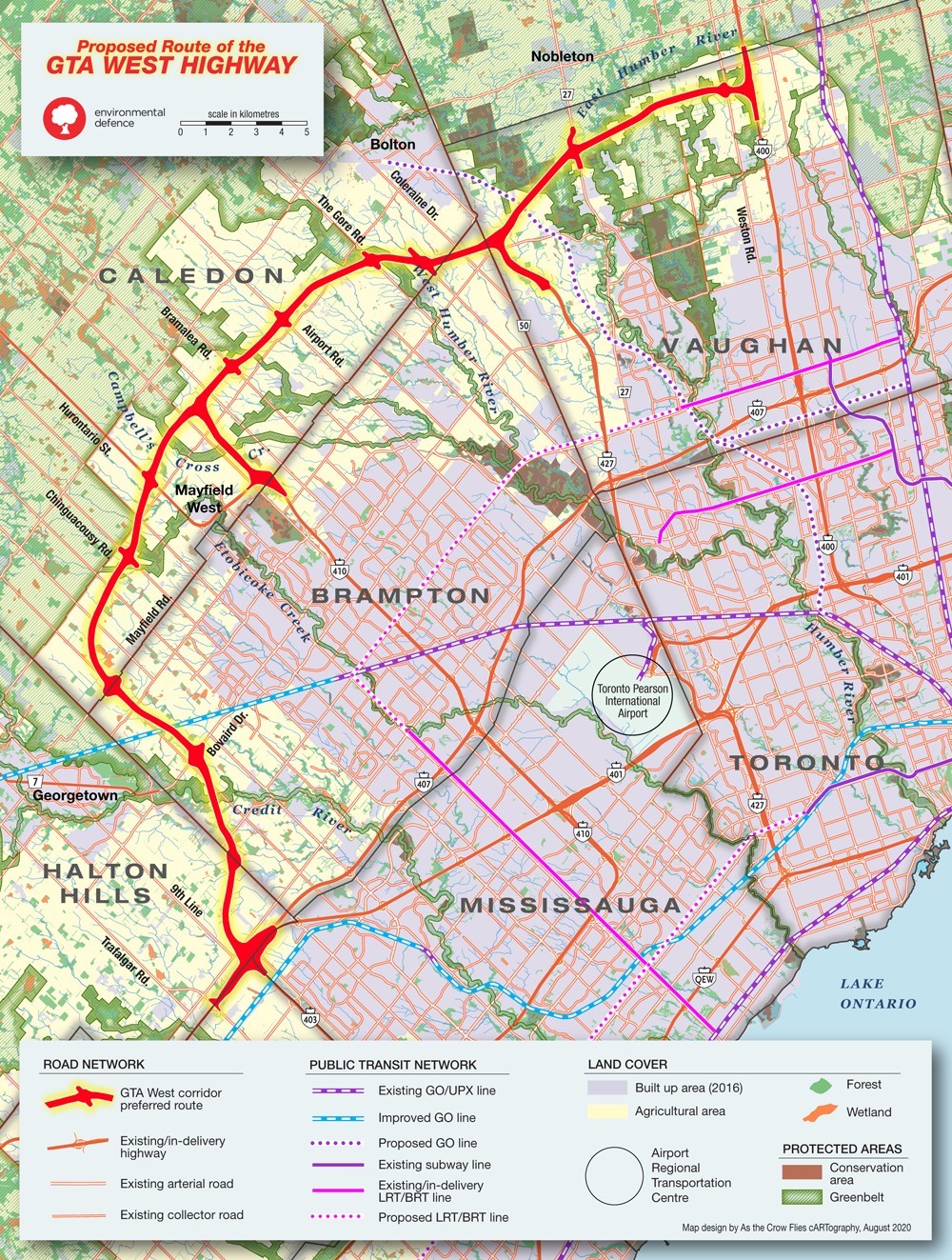 The proposed route of the GTA West Highway.
(Map from Environmental Defence)


Other topics unabated Friday at the MBOT event included pandemic recovery and support for businesses, housing and affordability, gender equity and climate change.
MBOT represents and advocates for the city’s business community, and a pressing question for any entrepreneur is how to recover from the continuous lockdowns and other restrictions needed to curb the spread of the virus.
Ras opened the discussion by referencing the Conservative plan for economic growth and prosperity to move the country forward. He said the Party has a number of industry and employee-friendly initiatives to help invest in job creation and small and medium sized businesses.
“One of the initiatives is to pay 50 percent of the salary of new hires for six months following the end of the Canadian emergency wage subsidy,” Ras said.
Samuel, who uses they/them pronouns, chose to focus on workers.
“Our commitment is to support our workers, especially during this pandemic supporting them, health wise from an intersectional standpoint,” Samuel said, “[T]hat begins with a full review of what supports our workers socially as they work for the top companies that are represented here in Mississauga.”
Samuel comes from an activist background and chose to focus on those who have suffered disproportionately during the pandemic. In Peel Region, many workers in large manufacturing and warehouse industries faced conditions that put them in contact with the virus. Many workers in these industries have low wages and couldn’t afford to skip a day of work even if they were sick.
Those close to the poverty line chose between a day’s pay or putting food on the table for their families. With massive job losses across the country and in non-essential industries, workplace spread occurred across Peel, which became a national hotspot.
Hill blamed the region’s problems on poverty, not necessarily the pandemic.
“Poverty is expensive, and already costs taxpayers $20 billion each year. So let’s end poverty and all of the painful and just life destroying effects caused by it. Let’s get this issue done,” he said.
Hill and his Green Party are advocating for a permanent guaranteed livable income for all.
Alghabra focused on the Liberal’s narrative of how much the government accomplished despite the lack of preparedness for the pandemic. Throughout the campaign, Liberal candidates have highlighted how quickly and how much the party in power assisted Canadians over the last 18 months, and Alghabra kept pressing this point.
“We’ve done it in collaboration and cooperation with businesses, including businesses here in Mississauga,” the Liberal incumbent said, “where I was available, and my colleagues were available on a regular basis, hearing directly from businesses.”
Samuel pushed back, questioning why the Liberals failed to support enhanced measures proposed by the NDP, on issues such as rent relief.
“I wonder why there is this talk about this presence that the Liberal Party of Canada has for Canadians and working Canadians and small businesses, when they’ve been doing the bare minimum,” Samuel said.
Alghabra responded. “Canadians know who delivered, Canadians know who had their backs and Canadians also remember that the Conservatives were critical of all the support that the government had provided.”
Ras defended his party, saying “simple administrative changes” Conservatives were focused on would have made subsidies better for small businesses. The candidate did not offer specifics on the types of changes.
On the topic of green innovation and the economy, all candidates offered concrete ideas from their respective platforms and how they would advocate on behalf of their riding and municipality.
“The NDP sees us [Canada] as resource rich, not just with respect to the natural resources we have, but the brain power that we have to make a digital transformation possible. This is our pathway into a clean, green future,” Samuel said.
Ras offered similar views. “I agree with much of what you said, exactly and especially about the need to bring every resource to the table.”
Alghabra took the opportunity to show the “stark” contrasts between the Liberal and Conservative plans on climate action. He said the private sector needs to be involved but the government has to play a leading role to set certain standards.
The incumbent used a similar line brought out by Justin Trudeau during the English language debate on Thursday. The Liberals have claimed “private sector analysts” reviewed their climate plan and gave it an 8 out of 10.
“The NDP plan got two and the Conservatives’ plan got five. It’s actually been assessed through experts, independent experts, that our plan is the best plan for business and for climate action,” Alghabra said.
The Green Party and many others have questioned the Liberals about who these experts are and whether or not they have ties to the Liberal Party. Trudeau and the Party leadership have not provided details around these experts and the rating that is now routinely being used by Liberal candidates.
Hill answered a question about how his party will address the talent shortage and gaps in labour capacity along with the need for more skilled trades. He brought the conversation back to what he said is the root of the issue: the lack of access to education and training.
“[The] Green Party proposes to make university tuition free, so that the largest number of students can become qualified at a university level in order to fulfill these very important jobs that are necessary for Canada’s future,” he explained.
The NDP’s Samuel said, “I love the Green Party’s idea about making tuition free.”
Samuel continued to explain how access to education in green industries is the reason for the talent gap. They also explained how it is important to direct opportunities at “disenfranchised groups,” like women, LGBTQIA2S people and visible minorities.
The MBOT debate concluded with the moderator reminding the public voting day is on September 20.


Email: [email protected]
Twitter: @taasha__15
COVID-19 is impacting all Canadians. At a time when vital public information is needed by everyone, The Pointer has taken down our paywall on all stories relating to the pandemic and those of public interest to ensure every resident of Brampton and Mississauga has access to the facts. For those who are able, we encourage you to consider a subscription. This will help us report on important public interest issues the community needs to know about now more than ever. You can register for a 30-day free trial HERE. Thereafter, The Pointer will charge $10 a month and you can cancel any time right on the website. Thank you.