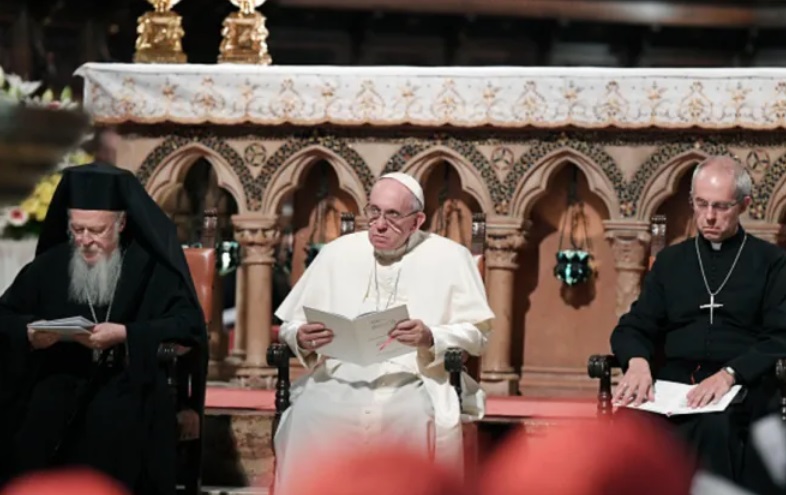 The three Christian leaders said that there would be “catastrophic consequences” for future generations unless the world took responsibility for environmental damage.

“The current climate crisis speaks volumes about who we are and how we view and treat God’s creation. We stand before a harsh justice: biodiversity loss, environmental degradation and climate change are the inevitable consequences of our actions, since we have greedily consumed more of the earth’s resources than the planet can endure,” their statement, issued on Sept 7, said.

“But we also face a profound injustice: the people bearing the most catastrophic consequences of these abuses are the poorest on the planet and have been the least responsible for causing them.”

“We serve a God of justice, who delights in creation and creates every person in God’s image, but also hears the cry of people who are poor. Accordingly, there is an innate call within us to respond with anguish when we see such devastating injustice.”

The Pope, the Ecumenical Patriarch of Constantinople and the Archbishop of Canterbury signed the joint text on Sept 1. The message brought together the Catholic Church, the Eastern Orthodox Church, and the Anglican Communion, respectively the world’s largest, second-largest and third-largest Christian communions.

“As leaders of our Churches, we call on everyone, whatever their belief or worldview, to endeavour to listen to the cry of the earth and of people who are poor, examining their behaviour and pledging meaningful sacrifices for the sake of the earth which God has given us,” the three men wrote.

“As world leaders prepare to meet in November at Glasgow to deliberate on the future of our planet, we pray for them and consider the choices we must all make,” it said.

In their joint message, the Pope, the Patriarch, and the Archbishop said: “In our common Christian tradition, the Scriptures and the saints provide illuminating perspectives for comprehending both the realities of the present and the promise of something larger than what we see in the moment.”

“The concept of stewardship – of individual and collective responsibility for our God-given endowment — presents a vital starting point for social, economic and environmental sustainability.”

They concluded: “All of us — whoever and wherever we are — can play a part in changing our collective response to the unprecedented threat of climate change and environmental degradation. Caring for God’s creation is a spiritual commission requiring a response of commitment.”