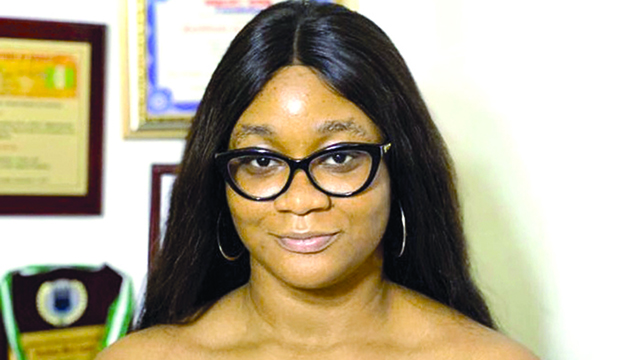 Shortly before the king marked his ninth anniversary on the throne recently in Oghara, headquarters of Ethiope-West local council of Delta state, Omeyoma took her time to carry out a special campaign, an environmental awareness to promote grassroots sustainability efforts in proper waste management and self-funding.
Eshemitan
The campaign by Princess Omeyoma Eshemitan to stop indiscriminate dumping of waste in Warri and its environs attracted many young Nigerians, who marched around different parts of the city, including Enerhen and Jakpa before converging at the popular Airport Junction.
Her aim is to encourage and educate Nigerians, both young and old, on the need to stop indiscriminate dumping of waste.
According to her, the main objective of Cleanpick Green Nigeria is to sensitise the people on environmental sustainability, specifically proper waste management.
“We have to educate our people on the benefit of maintaining a good environment,” Princess Eshemitan said, adding, “We have to do this at the grassroots level, and I am excited with the high level of compliance by the people. It is important we let our people, especially the young generation to know how their everyday actions constitute environmental degradation, the reality of climate change, and the impact of poor waste management on both the environment and climate. The essence is to get people to be more committed to sorting their wastes and recycling them.”
She continues: “Part of our campaign is to provide writing materials and get more kids in school by substituting plastics for fees. We are currently working on a community project, first in Uvwie, where we had our awareness work. This project is focused on reducing open defecation because I find it appalling that at this day and age, many people still defecate in open places. So, we want to use plastic to build public toilets. I want to use proper waste management to solve majority of Nigeria’s problem, which includes diseases, lack of jobs, education, power etc. It has to start here in delta state.”
Princess Omeyoma Eshemitan studied Law at the University of Lagos. In 2018, she started her research on the impact of plastic pollution in the society after watching the young Greta Thurnberg, whose talk centered on the reality and impact of plastic pollution.
“It was like a wake-up call to me,” she said. “I began researching and I was shocked when I found that if I do not take actions within my state and country, we could go extinct. Even before then, people and waste will begin to compete for land space.
“The Niger Delta region is known for fishing and it was estimated by the United Nation that if nothing is done, the impact of poor waste management will become a major problem soon. We could have more plastics in the ocean, considering the reality of the system currently practiced where waste is dumped in rivers and land. We have to do something so that our generations will not suffer more,” she stated.
Last week, Princess Omeyoma Eshemitan’s awareness campaign train landed in Ogulagha, a riverine and oil-producing Ijaw community in Burutu council area of Delta State. “We have retrieved over 100 tonnes of plastic within four months in that community,” she stated.
According to her, the event in Ogulagha is a cleanup and door-to-door enlightenment on proper waste management and recycling.
“We are going to clean the banks of the rivers and beaches there, sort materials and pick up the plastics materials,” she told The Guardian. “We are also going to make use of a known event in Warri, RAVE, which is one of the biggest social gatherings to enlighten the public about the importance of sustaining the environment and proper waste management involving recycling. We will demonstrate how to sort waste as well as collect all recyclables during the event.”
She continues: “We received support and partnerships from various organisations such as E-Terra, the leading E-Waste management company, E-waste Relief foundation, clean Warri, and others. We also got support from the local government. Our collection center at Ogulagha is team-funded.
“Being a princess here in Delta state, I realised I could do a lot with my influence for my people. So, I decided to go to work and face the part for the sustenance of my people and humanity generally.
“What is the point of practicing law or having any form of job, if we had no habitat. The environment is the fountain of life and our existence so it is just so important and became a priority for me.”
To enable commenting and other interactive features, please switch to the more advanced .
Get the latest news and analysis of issues from Nigeria, Africa and around the world, direct into your inbox, daily