Mongabay Series: Amazon Conservation
Less than two weeks after preliminary data from the Brazilian government suggested a year-over-year drop in Amazon deforestation over the past 12 months, independent analysis from a Brazilian NGO provides evidence of a sharp increase in the rate of forest destruction in Earth’s largest rainforest.
Last week Imazon, an organization based in the Amazonian city of Belém, published the July data from its Sistema de Alerta de Deforestation, which monitors forest clearing in the Amazon on a monthly basis. The data showed that 2,095 square kilometers (809 square miles) of forest were cut down during July, bringing the total deforestation detected since August 1, 2020 to 10,476 square kilometers, the highest on record since at least 2008. The total was the largest extent of monthly forest loss during that period.
By Imazon’s count, the amount of forest loss detected by its deforestation monitoring system was up 58% over a year ago, and 107% relative to two years ago.
In contrast, Brazil’s national space research institute INPE reported a 6.8% drop in deforestation compared to a year ago.
Discrepancies between the two systems can be chalked up to differences in how they measure deforestation over time. But normally, the data from the systems show a high degree of correlation, rather than the sharp divergence that has emerged since June 2020, when Brazil received significant international attention for its rising deforestation rate. 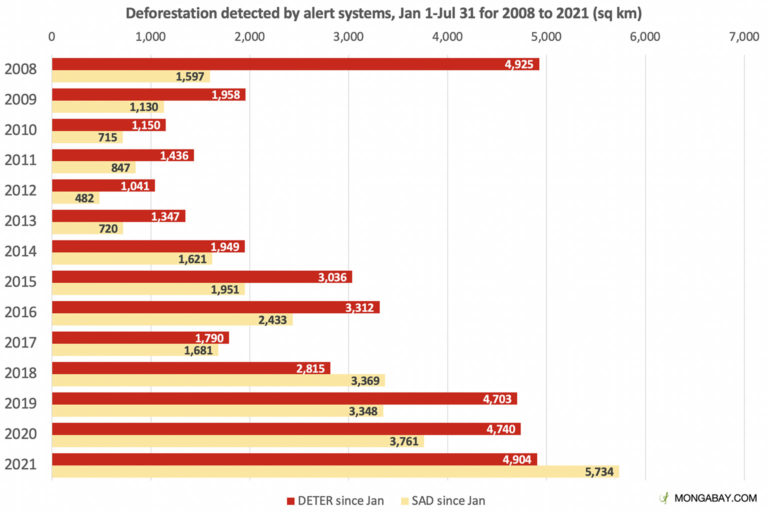 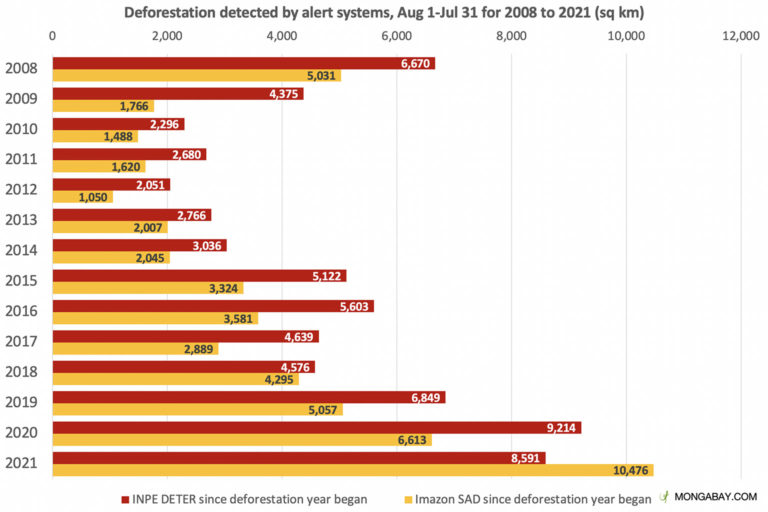 But the data released to date is considered preliminary because the near-real-time deforestation alert systems are less precise than the systems used for assessing deforestation on an annual basis. Initial estimates for the August 1 through July 31 period Brazil uses for measuring annual deforestation is expected in November.
Nonetheless, the data from Imazon and INPE suggest that, at the very least, deforestation in the Brazilian Amazon remains near the highest levels observed since the late 2000s. After bottoming out in 2012, the deforestation rate in the region has been trending upward, accelerating sharply since Brazilian President Jair Bolsonaro took office in January 2019. Bolsonaro has rolled back environmental protections and law enforcement, criticized environmentalists and Indigenous Peoples, replaced scientists with political allies in government institutions, and openly encouraged forest conversion during his time in power. 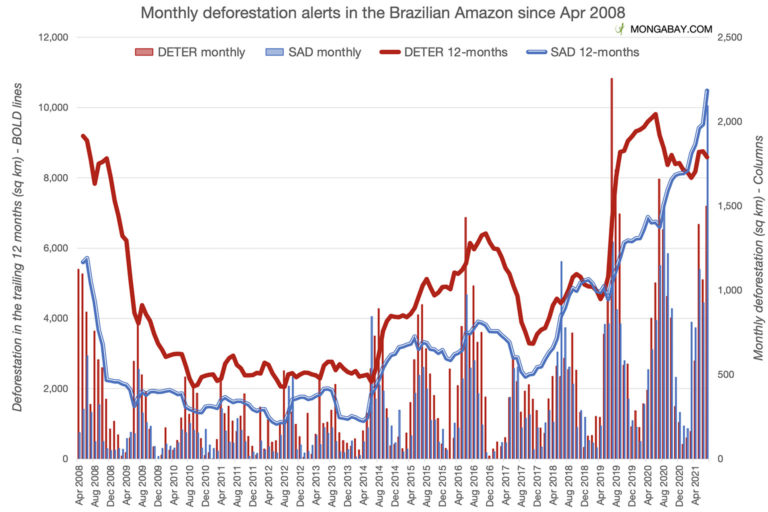 Environmentalists and scientists fear that deforestation and fires in the Amazon may be poised to further increase due to dry conditions across much of the region.
Droughts have become more common in the southern Amazon in recent years. Scientists suggest that a combination of climate change, forest degradation, and deforestation are the culprits for the changing conditions, which worsen the risk of fire and large-scale tree die-off.

Mongabay is a U.S.-based non-profit conservation and environmental science news platform. Our EIN or tax ID is 45-3714703.