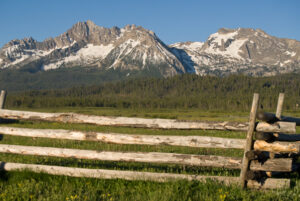 Sawtooth Mountains, Idaho. Photo George Wuerthner
Though most conservation groups focus on federal lands, a neglected area of concern are state properties. Throughout the West, most of these lands are either leased for timber cutting or livestock grazing.
Although there are limited ways that conservation groups can influence state management (or lack thereof) of these lands, there are a few options that the Western Watersheds Project (WWP) and a few other conservation groups have utilized to protect key parcels. The obstacles to public influence on state trust lands are numerous and similar across the West. But in some instances, the very regulations that protect resource abusers can sometimes be used to further conservation goals.
For instance, WWP just won a 20-year lease on a 640-acre section along Champion and Fourth of July Creeks in the scenic Sawtooth Valley of central Idaho. Champion Creek is home to ESA-listed steelhead and Fourth of July Creek provides habitat for bull trout, which are also listed under the ESA. With the removal of livestock, the riparian areas and water quality will improve, thus benefiting the fish. There is also a small herd of pronghorn that frequents the section who will no longer have to compete with domestic sheep for forage. 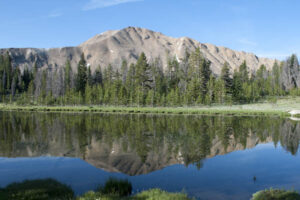 The headwaters of Fourth of July Creek in the Boulder White Cloud Wilderness. Photo George Wuerthner
This parcel has exceptional value because it is adjacent to Forest Service lands that are ungrazed, thus amplifying the overall value of protection of the state lands.
The previous grazing leaseholder was paying about $800 a year to lease the Champion Creek state lands. It is a pittance in terms of its value for state school funds but particularly egregious when you consider the ecological costs of any domestic livestock grazing to wildlife and fish.
To obtain control of this state, WWP had to bid $8,200 to win the auction for the expiring lease and will annually pay the Idaho State lease fee of approximately $1000 a year.
In the past, Idaho ranchers tried to preclude conservation bids on state grazing parcels arguing one had to actually graze them. However, WWP won a successful lawsuit that determined conservation use (i.e. elimination of domestic livestock grazing) was valid, although as noted above, WWP must still pay a fee as if it were being grazed.
BACKGROUND ON STATE LANDS
Upon admission to the Union, all western states were given two sections (square mile) out of every township (Utah, New Mexico and Arizona received four sections per township) for beneficial uses, primarily supporting public school education. However, over time, due to land trades between federal and state agencies, many of these parcels have been aggregated into larger pieces to facilitate better management or, in the case of the state lands, better opportunities to exploit the lands for resource extraction. 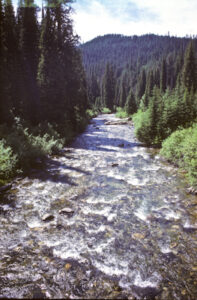 Forestlands like this area in North Idaho provide the bulk of “profit” from resource extraction on state trust lands. Photo George Wuerthner
Idaho has about 2.4 million acres in state trust lands. About 1 million acres are forestands, and 1.4 million are rangelands grazed by livestock. The bulk of the annual “profit” from resource extraction comes from its timberlands in northern Idaho. In 2019, the state raised approximately $78 million for distribution to “beneficiaries,” with the bulk of this amount, $50.2 million going to the public school fund.
The state land board also justifies the logging and grazing of state lands using economic “multipliers.” In other words, it will say that any logging or grazing generates income for loggers, mill workers, cowboys, and so forth. 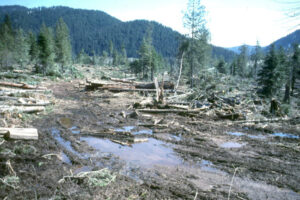 There are many unaccounted “costs” to logging including loss of carbon storage that are not in the calculations of the State Land Board. Photo George Wuerthner
The problem with this accounting is that it ignores the fact that intact lands also have value, including jobs. A clearcut forest might generate income for a logger but cost the job of a fishing guide if the fish habitat is damaged.  There are ecological values too. Unlogged forest lands provide a considerable amount of carbon storage.  Typically, state land boards don’t want to assess the externalized costs of any resource extraction.
Unfortunately, this has resulted in a substantial amount of state lands devoted to resource extraction to generate funds for the schools. In some cases, states have even disposed of (sold) state lands to anyone who nominates land for sale.
I once met a guy on a plane who told me he had purchased 640 acres from the state of Idaho by nominating the area for sale, and he was the sole bidder. He got the land for a relatively low price ($16,000 if I remember correctly) as a result. One can still nominate lands for deposal, which, if approved, are sold at public auction. The loss of public lands sold for a pittance ultimately is an actual loss to all citizens. 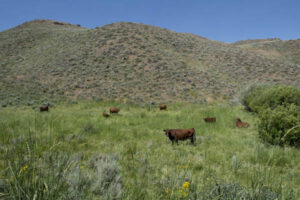 It costs ranchers about $7 per AUM to graze state trust lands, while similar private lands cost about $18 an AUM. Photo George Wuerthner
The imbalance is even more significant with livestock grazing. Livestock permittees pay almost nothing to graze state lands averaging $7 an AUM (Animal Unit Month or the forage consumed by one cow and calf or five sheep).  By contrast, in Idaho, a typical private land AUM costs over $18 a month. That is one reason why ranchers fight so hard to maintain grazing privileges on public lands—it’s a substantial public subsidy of their operations.
In the big scheme of things, the earnings from domestic livestock grazing of Idaho’s state rangelands is about $1 million a year. Yet, for this relatively small contribution to statewide schools, Idaho residents suffer the environmental degradation that results.
Replacing that annual $1 million from livestock grazing fees would amount to almost no cost per individual taxpayer. Not to mention the state legislature just approved a $220 million tax rebate to taxpayers that could have replaced all funds from livestock grazing for centuries.
ELLIOTT STATE FOREST
Changing state land management is difficult due to the laws and other impediments for anyone seeking to put resource protection over resource extraction. For example, a recent controversy over state timberlands in Oregon represents the challenges conservationists face if they seek to preclude resource extraction.
The 82,000-acre Elliott State Forest located along the coast has some substantial amounts of old-growth timber that is valuable habitat for marbled murrelet. The state had planned to log the old-growth, but conservationists were successful in stopping the sale. Nevertheless, there was the problem of how to produce income for education. The timber industry likes to use the slogan “Logging for kids.” So who can be against logging if it benefits kids?
Due to public outcry, the state land board canceled the timber sale, and the Elliott State Forest was to be managed as a “research forest.” Unfortunately, this designation still leaves the area open to logging (can’t we research the impacts of logging on sites already logged?), but with significant conservation gains.  And the state is required to compensate the school fund to the tune of $221 million, which is the estimated loss to the state if the area is conserved. 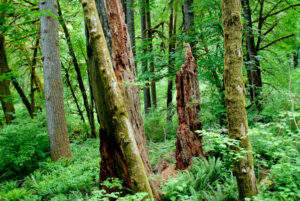 One of the most important “values” found in the Elliott Forest is carbon storage, which is completely ignored by the state land board in its assessment of the benefits of logging. Photo George Wuerthner
One of the problems with all state lands is that the ecological costs of resource extraction are never considered in the calculations. For instance, just the carbon storage value of leaving the Elliot Forest alone is probably worth more to the state of Oregon than any money generated by logging, not to mention the ongoing impacts to water quality, loss of habitat for wildlife, and even the impact on recreation from logging operations. No resource extraction, even logging valuable old-growth timber, would be profitable if all costs were internalized.
These are costs that the timber industry and state land boards externalize to all Oregon taxpayers and even federal taxpayers incur when we spend money trying to reduce impacts on endangered species, restore watersheds damaged by logging, and so forth.
NO GOOD WAY TO DO THE WRONG THING
There is no way to graze livestock in the arid West without substantial ecological costs. In addition, the overall aridity (which translates into limited forage production) and generally steep terrain which concentrates grazing animals result in environmental damage. 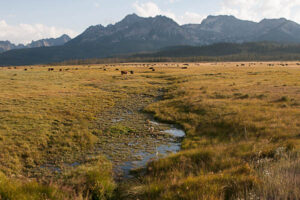 Riparian area denuded by cattle with bank damage from cattle hooves in the Sawtooth Valley. Photo George Wuerthner
Pollution of water, forage competition with native herbivores from grasshoppers to elk, social displacement of native grazers (elk and pronghorn both avoid areas with active livestock grazing), fences that kill or entrap native wildlife (there is significant mortality for flying sage grouse from collisions with barbed wire fences), disease transmission from domestic animals to wildlife (bighorn are often infected with disease transmitted from domestic sheep), the spread of weeds that degrades the overall value of land for all wildlife, trampling of riparian areas that are used by 70-80% of all wildlife in the West, and the loss of biocrusts that are destroyed by hooves. 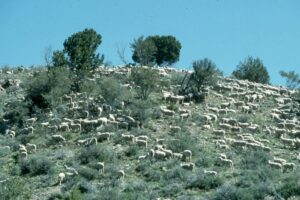 Hooved locust is how John Muir described sheep bands. Not only do domestic sheep often strip the hills of vegetation but they can transmit disease to wild bighorn sheep. Photo George Wuerthner
Lest we forget, the irrigation for livestock forage production also dewaters the West’s river, an even greater impact in drought as is occurring now with many streams completely dewatered with all the water going to produce hay or alfalfa. 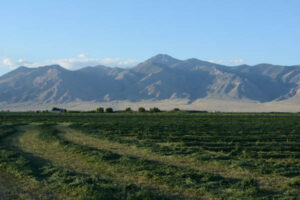 The biggest consumer of water in Idaho is for irrigated forage for livestock which often results in the dewatering of streams and rivers which severely harms aquatic ecosystems. Photo George Wuerthner
If one looked at just the ecological damage from livestock use of these lands, it would make no sense to lease them at all. But no such accounting occurs.
It’s unfortunate, however, that conservationists have to spend money to protect lands from abuse. It would be analogous to paying a factory owner not to pollute the public’s air.
Nevertheless, the Champion Creek lease will make a small contribution to the survival of endangered fish. It is still a step in the right direction.
George Wuerthner is an ecologist and former hunting guide with a degree in wildlife biology
Fantastic!!!
Thanks
Congratulations and with much gratitude for some GOOD NEWS !
Thank you
Always a huge event – so glad to hear of the success! Hope there are many more coming.
Your email address will not be published. Required fields are marked *


Enter your email address to subscribe to this blog and receive notifications of new posts by email.
Join 781 other subscribers