MoEF&CC’s new guidelines no deterrent; rather, they send a message to violators to ‘pay their way through’

The latest guidelines from the Union Ministry for Environment, Forest and Climate Change (MoEF&CC) to prevent violations of green norms actually seem yet another attempt to weaken the  Environment Impact Assessment (EIA) regime.
The National Green Tribunal (NGT) had asked the ministry to formulate a standard operating procedure, keeping the ‘polluter-pays’ principle and the ‘principle of proportionality’ in mind. The green bench was concerned by continuous violation of environmental norms by infrastructure and industrial projects.
The environment ministry’s office memorandum (OM) dated July 7, 2021, empowers regulatory institutions at both central and state level:
There have been many instances in the past by MoEF&CC to weaken the EIA process. The final nail in the coffin was the introduction of draft EIA Notification, 2020 which received a lot of flak from civil society, academicians and environmentalists. Consequent to the public outrage, the draft is under scrutiny at present.
However, experts are of the opinion that there is an ill-conceived push to introduce sections of the draft EIA, 2020 as OMs on the pretext of scrutiny. The present OM seems like another such experiment that has been replicated from the draft EIA 2020 and elbowed through the backdoor without any consultation with the public.
The current memorandum by the ministry is the outcome of the NGT coming across grievances over the last several years where projects were completed without grant of prior environmental clearance (EC) and the State Environment Impact Assessment Authority (SEIAA) failed to abide by the “rule of law” requiring “demolition” or “payment of assessed compensation” from the project proponent.
The following case scenarios will be categorised as ‘Violation’: First, on-site construction or installation or excavation without obtaining EC; Second, expanding the production capacity and / or project area beyond the limit specified in the existing EC letter; and Third, changing scope of the project such as modification in product/s without prior approval from the ministry or SEIAA.
‘Non compliance’ refers to not complying with the terms and conditions prescribed in the EC letter of the project awarded by the MoEF&CC or SEIAA.
Clause 13 of the OM includes the provision to identify, examine and appraise violation projects, to refrain them from causing further environmental damage and also to compensate for causing damage to the environment.
Under this provision, the Central Pollution Control Board (CPCB), state pollution control board (SPCB) and union territory Pollution Control Committee (UTPCC) are directed to identify cases of violation under their respective jurisdiction and report it to MOEF&CC in the case of Category A projects and to the SEIAA in case of Category B projects for further action.
SPCBs and UTPCCs have also been directed to not issue or renew Consent to Operate (CTO) to entities that do not have prior EC.
The violation can also be reported suo motu by the proponent itself. The OM includes an additional provision stating “The CPCB, SPCBs and UTPCCs shall expeditiously examine the references received from the public and others in relation to violation and take necessary actions”.
This provision was missing in the draft EIA 2020 notification and has caused a huge outcry among environmentalists all over the country. They demanded that the public be allowed to report violations.
The current OM has included this provision. However, it has not defined what references could be submitted for the consideration of authorities. There is also no mechanism elaborated upon how these complaints are to be registered.
There is also no established procedure to ensure that the complaints made against the violator are not dismissed without hearing. This ambiguity in the memorandum leaves scope for a less transparent redressal mechanism.
Clause 11 of the OM defines three different actions to be taken for the violation projects depending upon their EC status. In case the project has not obtained EC, it will be ordered to close its operations. If the project has undergone expansion without obtaining EC for the expanded portion, it will be ordered to revert the activity / production to the limit granted in the existing EC. 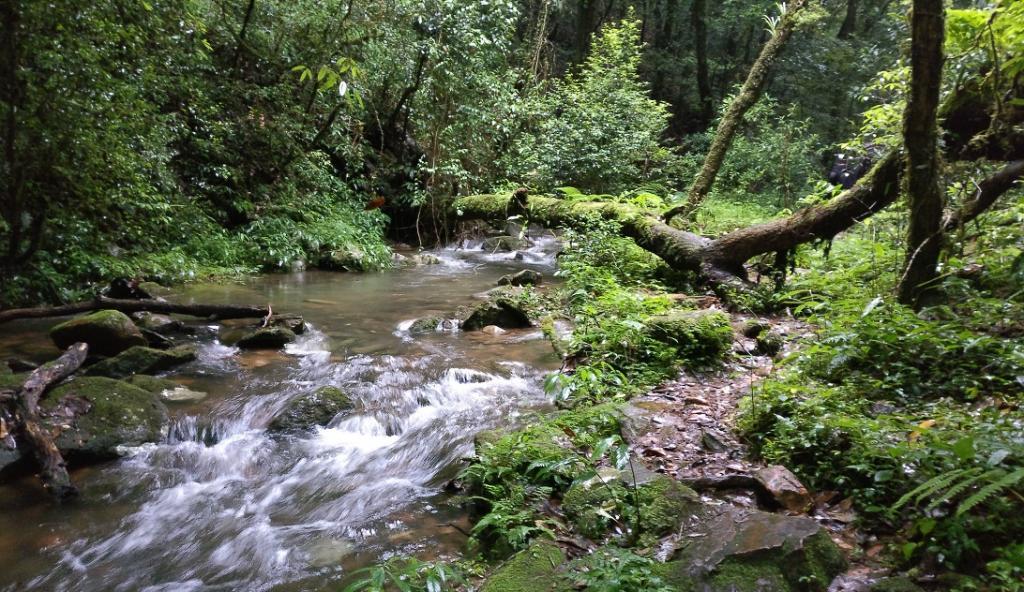 There might be projects which do not require EC according to their earlier production. But an EC is required after expansion. Such projects will be ordered to restrict the production / activity where EC was not required. For all these projects, actions will be initiated according to the Environment Protection Act, 1986.
This clause tries to highlight the thoughtful approach of MoEF&CC towards the protection of the environment. However, there is a catch in this clause. All the three actions mentioned above for projects will be temporary and will be in effect till those projects do not get the required EC.
This implies that these projects will be given an opportunity to apply for a fresh EC and undergo the appraisal process by MoEF&CC in case of category A projects and SEIAA in case of category B projects.
While appraising the violation cases, the appraisal committee will scrutinise the project on the basis of its environmental sustainability and will determine whether the project will be permitted to operate further or not.
In case the project is found to be ‘Not Permissible’ for EC at the time it was started, the project will be ordered to be demolished / closed down permanently. However,the project which is found otherwise  permissible, but not environmentally sustainable in its present form, will be directed to modify to fulfill the requirements of environmental sustainability.
The projects which are found to be permissible and environmentally sustainable will be asked to submit the complete EIA and the Environmental Management Plan report of the project. These projects will also be required to undertake damage assessment, remediation plan and community augmentation plan to restore the environmental damage caused by the project including its social aspects.
The project proponent will have to submit the bank guarantee equivalent to the summation of damage assessment, remediation and community resource augmentation cost to the CPCB in case of category A projects and SPCB in B category projects. The quantification of this amount will be recommended by the appraisal committee.
Mechanism for scrutinising violation by projects 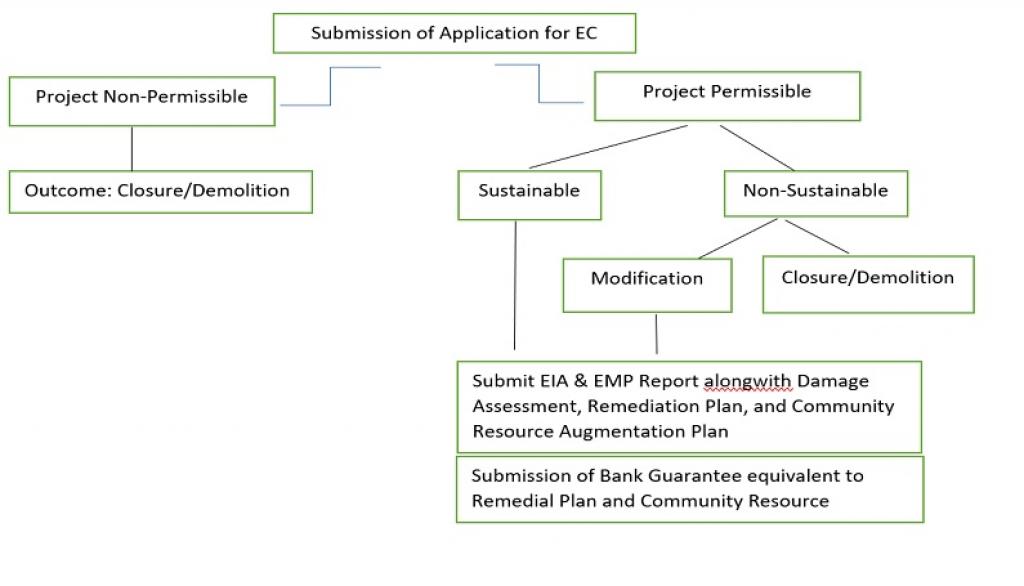 The detailed mechanism laid out in the current OM to allow operation of permissible and sustainable projects is nothing new and is exactly the same as provided in draft EIA notification, 2020.
However, the OM misses out on providing any system to demand remediation and restoration of environmental damage from the projects which will be directed permanent closure or demolition. Although these projects will not be allowed to operate further, the violator should be made liable for the environmental and social damage inflicted during its operational period.
In order to strengthen deterrence, clause 12 of the OM entitles the regulatory authorities to levy penalties on the proponent, in addition to the bank guarantee. The penalties have been broadly bifurcated for two kinds of projects — greenfield and brownfield.
In the case of greenfield projects where operation have not commenced, the penalty is one per cent of the total project cost incurred upto the date of filling of application alongwith EIA / EMP report. In the case of greenfield project where operation have commenced, the penalty is one per cent of the total project cost incurred upto the date of filling of application alongwith EIA / EMP report plus 0.25 per cent of total turnover.
However, the penalties on both project cost and turnover will be halved if the proponent suo motu reports the violation. This provision in the memorandum though will surely act as an enabler for the proponent to come forward.
The penalties suggested in the office memorandum could be termed as legitimating non-compliance. First, it is beyond logic as to how a Rs 100 crore company is not aware of  environmental rules and regulations. This indicates that the rules were flouted deliberately.
Second, the penalty is meagre. For example: A Rs 1 crore penalty to be levied on a Rs 100 crore greenfield project will also be reduced to just Rs 50,00,000 if reported first by the proponent. Such a provision will never act as deterrence for violation. Moreover, they will tempt projects to start operation, pay a penalty and continue.
Penalty to be levied in different scenarios
Source: Compiled by CSE
*project cost here refers to the cost incurred in the project upto the submission of application for appraisal
MoEF&CC initiative will not bear favourable outcomes
In March 2017, the MoEF&CC issued a notification that laid down procedures for appraisal of violation cases. The projects were granted a window of six months to be regulated within the existing environmental regime stretching from March 2017 to September 2017. However, on intervention of the court in 2018, this timeline was further extended by another six months extending from March 2018 to September, 2018.
The ‘window’ given to the project proponent was proposed as a one-time push for regularising existing violations. However, the present OM establishes an SOP for both current and any future violations. Thus, instead of acting as a deterrent for violators, it is instead building on the notion that violations can be course corrected by paying penalties.
Additionally, the process of identification of violation cases is in itself vague and faulty. Considering an acute shortage of manpower at CPCB / SPCB / PCCs, it is difficult to comprehend their seriousness in being able to identify such violation cases. It is therefore imminent that such limitations do not restrict the implementation of environmental norms or inadvertently enable defaulters.
Looking at the plethora of violation cases that the ministry / SEIAA are swamped with today, it is imperative to develop a mechanism where we do not compromise the existing environmental regulations and adopt a ‘zero tolerance for violation’ stance from hereon, says Nivit Kumar Yadav, Director, CSE.
We are a voice to you; you have been a support to us. Together we build journalism that is independent, credible and fearless. You can further help us by making a donation. This will mean a lot for our ability to bring you news, perspectives and analysis from the ground so that we can make change together.
Comments are moderated and will be published only after the site moderator’s approval. Please use a genuine email ID and provide your name. Selected comments may also be used in the ‘Letters’ section of the Down To Earth print edition.
Down To Earth is a product of our commitment to make changes in the way we manage our environment, protect health and secure livelihoods and economic security for all. We believe strongly that we can and must do things differently. Our aim is to bring you news, perspectives and knowledge to prepare you to change the world. We believe information is a powerful driver for the new tomorrow.
© Copyright Down To Earth 2021. All rights reserved.