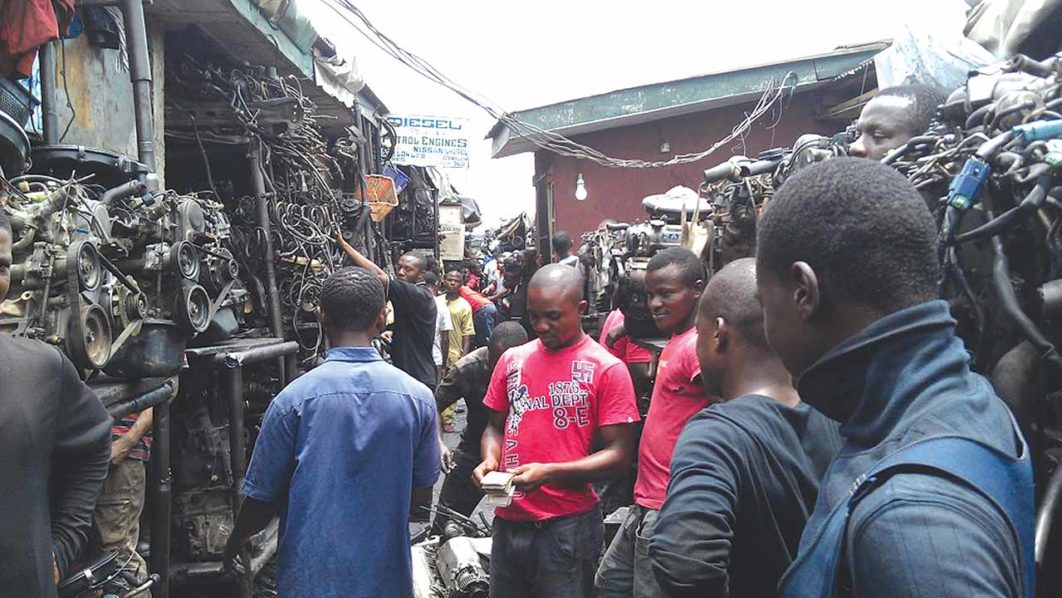 For a market adjudged as the largest of its type in Africa, the Ladipo International Auto Spare Parts Market in Lagos is, unfortunately, the biggest mess in its sprawling environmental decadence and incredible human lawlessness.
Ladipo Market
Recent pandemonium at the market which led to the killing of a trader deserves the full weight of justice, as well as a review of the marketplace that has morphed into a complete urban nuisance. In the past week, it has been practically impossible for vehicles to navigate successfully through the market, no thanks to heaps of refuse that effectively shut down the main Ladipo road.
The other day, men of the armed forces that are statutorily mandated to protect the State and the citizenry compounded the insanity in the market when they turned in ammunition to settle private scores with unarmed traders. This is unacceptable. All errant officials involved in the power show should be duly investigated and brought to book as deterrence to barbarism. By extension, it behooves the state government to come alive to its responsibility, stop indulging malfeasance and sheer lawlessness that has consistently reigned supreme in the flagship auto market.

While no one can deny the huge service that the Ladipo marker has been providing for motorists over many years now, it has nonetheless been a disaster waiting to happen. The shocking level of environmental degradation, lawlessness, and reckless conduct of private business concerns in the commercial epicentre has made tragedy only a matter of when. The shooting incident two weeks ago came as no surprise to many. It began as a scuffle between a trader and a soldier, who felt cheated in a transaction dated a year ago. Trigger-happy officers have ushered in reprisal and allegedly opened fire in the marketplace. At least three traders were allegedly caught by bullets and one Felix Nnana Onu was killed, causing Ladipo traders to go on the rampage in protest; thus exacerbating the breakdown of law and order on Apapa Oshodi Expressway. Regrettably, nothing so far has been heard on the matter, either from the Nigerian Army or the Lagos State government that has the constitutional responsibility on justice, protection of lives, and properties.

But it was not the first time the densely chaotic auto spare parts market has erupted and almost fell apart. Within the span of a month recently, there were two overnight fire outbreaks that claimed goods and properties worth several million. Unable to bin up the mess, the Lagos State Waste Management Agency (LAWMA) earlier threatened to shut down the market citing environmental degradation and the potential health danger. The agency accused traders of preferring to dump waste indiscriminately on roads, instead of patronising assigned PSP operators. Such intransigent attitude of some of the occupants had on several occasions caused the past administrations to shut down the market and threatened its relocation.

Over the years, the market gained ground in the Mushin-Isolo axis, crisscrossing federal, state, and local council roads. In leaps and bounds, it has festered across major and minor streets in the vicinity controlled by the Mushin Local Government. Brazenly, market kiosks and technicians encroached on the service lane segment at the Toyota Bus stop-end of the Apapa Oshodi Expressway. Workshops and junkyards extended into the expressway, competing with other users in a prodigal fashion. The result is traffic bedlam that makes commuting a harrowing task except on Sundays.
The shocking acts of lawlessness feature all open spaces being converted into fee-paying parking lots or used for wares’ merchandising particularly along the dual-carriage Ladipo Street linking the international airport corridor. Perpetually, the area is littered with imported Semi-Knocked Down (SKD) vehicles, trucks, used household items, and heaps of rubbish. All over our food remains water plastics and oil spills. The canal section is the cesspit of open defecations, wanton waste, and an epidemic time bomb waiting to explode. Adding to the squalid condition are weed-smoking touts, street urchins, and so-called task-force officials assigned to let rip on tolls and extort traders. They all constitute daily brawls and stampedes that make life in the area a detestable jungle experience.

As the local council authority fails to exact control and the traders abandon self organisation for rabid merchandising, unforgivable is the complicit negligence on the part of the Lagos State government. For both the state and local governments, the market is a revenue cash cow on a daily basis. Besides the rents and sundry dues payable in bulk, hundreds of vehicles in need of repairs are funneled into the market area daily and each charged N1000 for parking space. But there should be more to governance in this part of Lagos than a rent-seeking approach. It is curious that the Lagos State government would still be engaging touts as street revenue collectors while preaching smart city initiatives.

The Ladipo market mess may have predated the current administration; it has worsened in the last two years with the state government not paying adequate attention. Indeed, the urban transformation of Lagos demands more hands-on leadership and less showmanship. Traders have economic rights to their legitimate businesses, but solely within the space and rules permitted by the host state. Governor Babajide Sanwo-Olu and his team should borrow leaves from international best practice on the management of big markets in Africa. If the government, under Babatunde Fashola’s administration could clear the Oshodi Expressway of street traders, it is not beyond the current government to show commitment to functional Lagos and restore sanity in Ladipo Market and others like it.

No doubt, the unkempt state of the market environs provided a fillip to the recent shooting incident which nevertheless should be thoroughly investigated and culprits brought to book. There must never be a repeat of such action by trigger happy security men in a work area of high human density. Guns should be totally out of place in a market for fairly-used spare parts, no matter the provocation. The country is already too tense for a blunt show of force by military men who should know better in the art of self-restraint. Victims of that crisis should be duly compensated. Beyond that, the Lagos government should work in tandem with the leadership of the market to bring sustainable sanity into the bedlam situation. To keep such a big market amid residential communities, there should be enforceable rules of engagement binding on all stakeholders.

To enable commenting and other interactive features, please switch to the more advanced .