The draft Environment Impact Assessment notification 2020 minimises public engagement. How do other countries go about it?

The contentious draft Environment Impact Assessment (EIA) notification, 2020, for which several suggestions and complaints were received till August last year from stakeholders and environmentalists, is yet to be notified.
The exisiting notification mandates public consultation only once in the entire assessment process of a project — after the draft EIA report is prepared. The amendments to the notification proposed in March 2020 attracted criticism especially because it further limits public participation.
EIA 2020 will reduce the time given to the public for sending feedback and add more categories of projects which will be exempted from any form of public engagement.
Public consultation is an important step in the EIA process. The objectives of including it are quite clear: Raise awareness among the locals about the project, provide them an opportunity to put forward their perspective and comments, help project proponents understand and mitigate any local impact by discussing with people.
The current process
According to the EIA notification 2006, this public consultation is performed in two ways. First, written comments are sought on draft EIA report from stakeholders. Second, public hearing is conducted at or near the proposed project site.
The process looks promising and reasonable in providing opportunities to address public grievances and feedback.
Sadly, the process is riddled with lacunae, making the objective ineffective.
One of the major drawbacks is that public consultation is done when the draft EIA report is already prepared and is ready for final submission to the expert committee.
At this step, when the site and technology has already been selected, the EIA report has been prepared, what impact can public feedback have on the project?
Will the project be rejected by the expert committee if the local people stand against it? Is this step barely a formality for paper work?
The answer to these questions is a known fact now and has resulted in frequent instances of public outrage and dissent against in the last decade.
Public consultation has become an ineffective step in the EIA process and the whole objective is losing its essence.
Global practices
The situation is not similar in developed and other developing countries, according to an online discussion hosted by Delhi-based non-profit Centre for Science and Environment (CSE) on 17 February 2021.
It emerged during the webinar that countries have a provision for public engagement at various stages of the assessment process. Public discussions on projects are quite detailed during the EIA.
In Sweden, for instance, the applicant has to consult the public even before applying for a new project. The documentation of this consultation is a mandatory part of the application.
In a project for spent nuclear fuel facility, the project proponent conducted detailed public consultation through multiple rounds of public meetings and written communication with stakeholders.
In order to gain confidence of the public regarding the new project, the proponent also took a few stakeholders on a two-day study trip to a similar plant at another location to ensure they get a clear idea about the process and the possible impacts to provide feedback.
The Swedish EIA agency, however, still feels that the study trip has a limitation of people who can take part and measures need to be taken to ensure more participation.
Likewise, Ghana also practices continuous public consultation during the complete process of EIA. The law mandates public engagement at the project implementation step when monitoring results are publicised and people have an opportunity to address problems.
The locals are also required to be informed even at the decommissioning stage of the project. 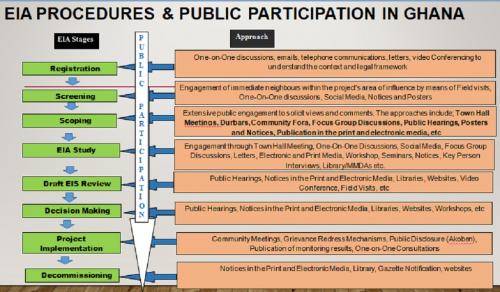 These steps were followed while assessing a project that proposed a fuel service station near a sacred pond.
After popular opposition, the EIA agency asked the project proponent to redesign the site layout and use an additional costly safeguard technique — fibre-coated underground storage tanks — to prevent pollution to the pond. The agency ensured to protect the sentiments of the local people along with the development.
The United States also has a very engaging environmental review process that brings in public consultation at an early stage.
The National Environmental Policy Act allows engagement of public from the scoping stage of the process and continues with the draft EIA report and final decision-making stage.
The NEPA has provided a dedicated timeline for the public to submit their feedback for the project.
The USEPA public consultation process 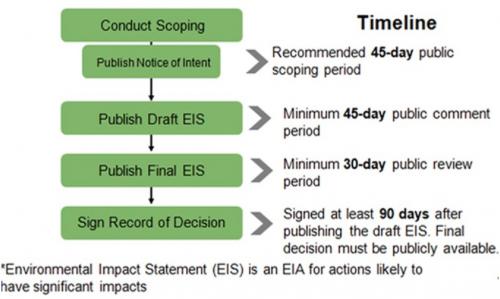 Source: Centre for Science and Environment, 2021
The government has additionally come up with a US Environmental Justice (EJ) Policy.
The objective of this policy is to identify minority and low-income populations that may be affected, address the disproportionately high and adverse human health or environmental effects on those populations and provide these communities an opportunity access to public information and participation.
The government has integrated this policy well into the environmental review system which has allowed low-income and minority communities to be a part of the public engagement process and share benefits.
This is an outstanding approach to ensure all communities are made aware of the process, are heard and measures are addressed in the report to mitigate the negative impacts of the project.
Way ahead for India
While other countries are making an effort to hear out the public and address their grievances, India is finding means to minimise public involvement in the EIA process.
The government should bet on inclusive growth where local residents are prioritised as much as the project proponent, said Nivit Kumar Yadav, Programme Director, CSE.
“More concerted and active participation of the people from an early stage of the project only can lead to inclusive development,” he added.
We are a voice to you; you have been a support to us. Together we build journalism that is independent, credible and fearless. You can further help us by making a donation. This will mean a lot for our ability to bring you news, perspectives and analysis from the ground so that we can make change together.
Comments are moderated and will be published only after the site moderator’s approval. Please use a genuine email ID and provide your name. Selected comments may also be used in the ‘Letters’ section of the Down To Earth print edition.
Down To Earth is a product of our commitment to make changes in the way we manage our environment, protect health and secure livelihoods and economic security for all. We believe strongly that we can and must do things differently. Our aim is to bring you news, perspectives and knowledge to prepare you to change the world. We believe information is a powerful driver for the new tomorrow.
© Copyright Down To Earth 2021. All rights reserved.